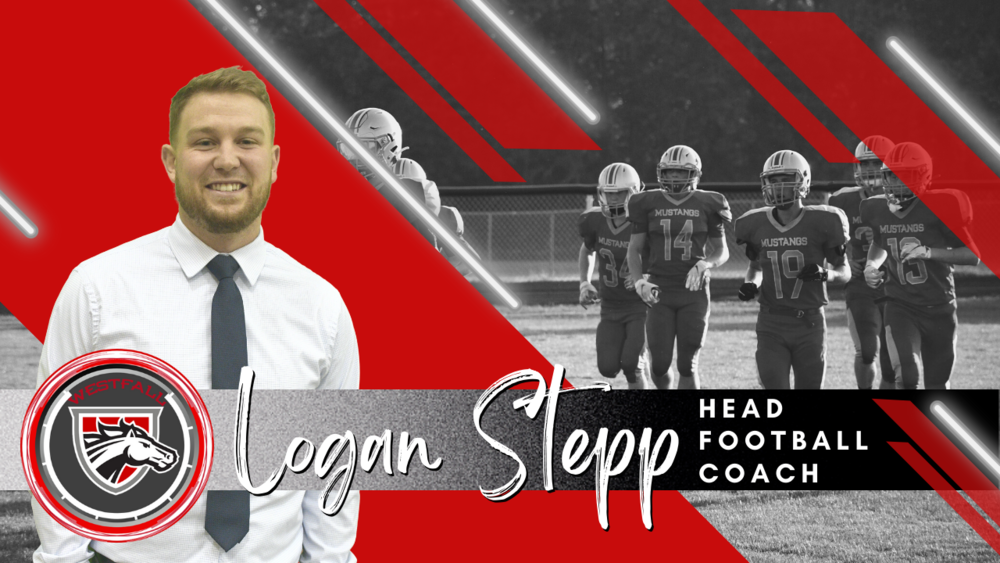 The Westfall Local Schools Board of Education voted to hire Logan Stepp as the new head football coach for the Mustangs. During his four-year stint with the West Jefferson Roughriders, he helped coach the team, under the guidance of head coach and Westfall alum Shawn Buescher, to two Final Four appearances. Stepp comes to Westfall, bringing the knowledge and experience from different coaching standpoints to build the Mustang football program back to its winning tradition.

Stepp started as an extraordinary player at West Jefferson High School and completed a phenomenal four-year run for the Otterbein Cardinals. He started two years as a wide receiver before becoming a two-time first-team All-Ohio Athletic Conference (OAC) quarterback.

"During the interview process, three things stood out about Logan Stepp - the importance of relationships, the importance of people, and the importance of winning," said Westfall High School Principal Jason Fife. "He's experienced a lot of success as a high school player, a collegiate player, as a young coach, and he knows what it takes to create a winning program."

Stepp joins the Mustang family and is eager to hit the ground running, ready to tackle the 2022 season. "We're really excited to have Logan on board for our kids, the community, and Westfall Athletics. We think he's going to do great things for our football program," said Trevor Thomas, Westfall Athletic Director.

Stepp has plans to reach out to all of Westfall's athletes, helping them achieve structure athletically and academically. "I'm excited to be here," said Stepp. "Westfall athletes want to win. I want to give the kids an opportunity to win socially, academically, and athletically. That's the whole goal. The goal is to win in all three phases of life, and I'm excited about the opportunity to help kids do that." Stepp's vision for the program and his passion are very clear, and we feel he will make an immediate positive impact on our young men.